The Pancamo is a monster based on the panda. "Pancamo" is derived from a combination of the words "panda", the animal it is based on and "camouflage", its most prominent ability.

Pancamos are white, fluffy, and furry creatures. They are armed with a scythe with a stone blade and a bamboo handle. They have black spots on their ears, eyes, and elbows. They have two green leaves attached to their ears. They wear a camouflage-patterned sash of specially-woven leaves and grasses.

Pancamos are herbivorous, oftentimes seen feasting on leaves and bamboo stalks. Their threatening scythes and camouflage ability allow them to scare or hide from predators.

Pancamos can perform the following abilities.

Woodland reap. The Pancamo sweeps its scythe around itself, cutting down enemies before it.

Camouflage. The Pancamo pulls up its sash over itself, concealing itself into the grass. 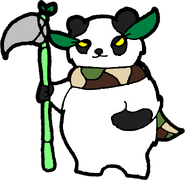 Alternate art by Zephyr PH.
Add a photo to this gallery
Retrieved from "https://a-monstrous-bestiary.fandom.com/wiki/Pancamo?oldid=537"
Community content is available under CC-BY-SA unless otherwise noted.