The Wildbell is a monster based on a bell flower plant. "Wildbell" is derived from the plant it is based on, the bell flower.

A Wildbell's skin is a lush, green epidermis that covers it from its head to its stem. Its head resembles that of a bird's wherein it is similar to that of a beak. It has a mouth, however it doesn't use it for eating or pecking but rather for spitting bullet seeds. It has a collar of leaves around its neck. Wildbells have roots that extend below the ground to absorb nutrients, limiting tgeir movement. The average Wildbell is 3 feet tall and 2 pounds heavy.

Wildbells thrive in forests, and can usually be found in groups with ample space between them to prevent overcrowding. Similar to plants, they undergo photosynthesis for sustenance, as well as rely on their roots for water and nutrients.

Wildbells are usually hostile at broad daylight and become passive around sunset and nightfall. During nightfall, it enters a deep sleep, putting its head down and closing its eyes, though its stem still stays relatively upright. Wildbells do not mind or care about nearby Wildbells or other plant-based monsters.

When it is active, it can do one of the following:

Seed toss. The Wildbell fires a blunt seed at a creature or human it deems neutral or hostile. The seed then rapidly grows roots on the target, making it rather irritating to remove, though not particularly dangerous. Wildbells also sometimes shoots seeds at the ground to reproduce. A child Wildbell will grow from the seed within a week.

Photosynthesis. The Wildbell slows down its metabolism and draws solar power. This is its way of feeding as well as healing itself. The Wildbell can not perform synthesis at all during the night. 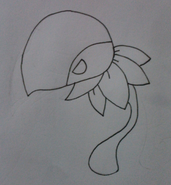 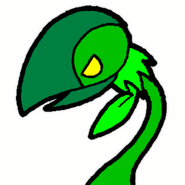 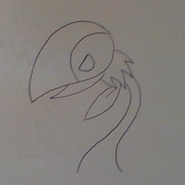 The seed Spitbells fire.
Add a photo to this gallery
Retrieved from "https://a-monstrous-bestiary.fandom.com/wiki/Wildbell?oldid=863"
Community content is available under CC-BY-SA unless otherwise noted.